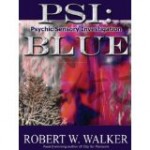 I’m excited to announce that my newest project has been released for download on Audible.com!  As I teased earlier last month, I narrated a crime thriller called PSI: Blue, written by Robert W. Walker.  It’s the first in a series of novels about an FBI investigator named Aurelia Hiyakawa, who solves cold cases using her […]

For those of you who love to read by listening, I’m thrilled to announce that I’ve lent my voice to a crime thriller written by Robert W. Walker, entitled PSI:Blue. Keep an eye on this page and I’ll post the link as soon as it’s available. If you’re curious about the book, you can download the […]