My Facebook feed blew up on Sunday night, thanks to a “little” show about Vampires called “True Blood.”  Why?  I made a very short cameo during the opening scene.  It’s so short, I don’t even think I’m credited. A friend of mine captured this screen shot: 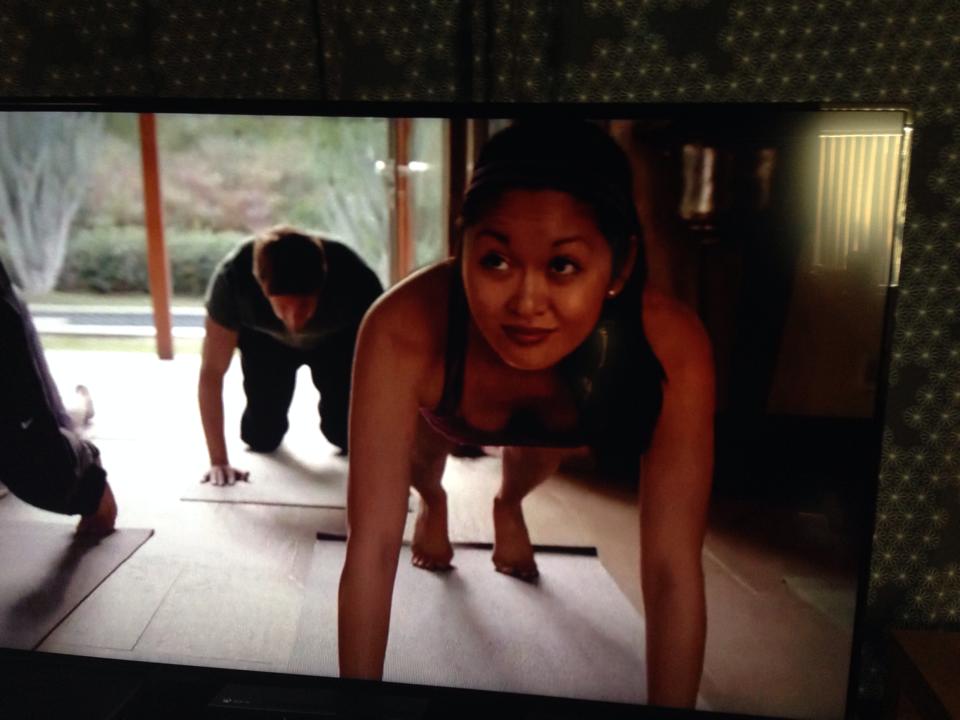 I’m blessed and lucky indeed to have gotten cast for the show – I’m sure hundreds, if not thousands, of aspiring actors submitted themselves to do yoga for this particular show on this particular day.  And I’m one of the lucky dozen who got the call, showed up on set and got paid to do yoga (something I pay to do regularly!) for several hours.  Whether or not you’re a fan of the show, the cast and crew are a class act, and it was such fun to play that day with that group of people.  I had just had a long training run the day before so spending the day doing yoga was the perfect post-run activity.  I remember leaving set feeling the endorphin high of having performed well and having gotten a great workout in.  Win-Win!!

And I’m super grateful that those few seconds of screen time brought so many friends – some of whom I hadn’t heard from in years – to my door to say hello and send a kind word of congratulations or to catch up.  This is just one small step in a much longer journey, but what a fun step it was!  If you want to catch the episode, it’s called “Fire in the Hole” and you can watch it on demand at HBO Go.  (If you blink, you’ll miss me.)

The life of a performer is full of highs & lows, heart and hustle.  Most of the time you don’t even see us, working our tailfeathers off to make something, anything happen. It’s the not-so-glamorous side of what we do every day. So having my butt show up on a TV show?  This is a gift. Thank you for watching, and thank you to everyone who posted, called, texted, or otherwise dropped into my life to share a kind word.  It meant so much, and I am so grateful.  Namaste.